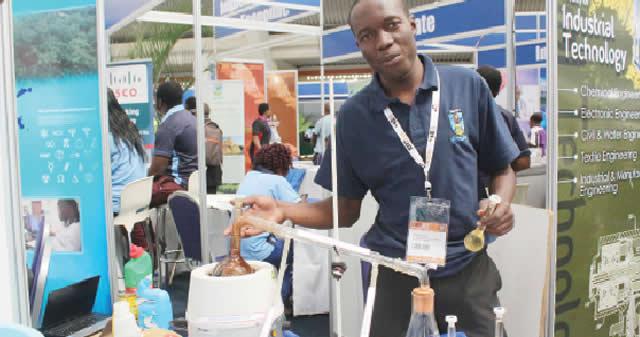 A former St Faith’s High School and National University of Science and Technology (Nust) student might have found a solution to the country’s litter problem after he designed a machine that turns plastic into diesel.

Farai Musendo a final year Chemical Engineering student said he designed the machinery after realising that the country was struggling to deal with litter.

Musendo is one of the innovative brains exhibiting at the 57th edition of the Zimbabwe international Trade Fair (ZITF) being held in the City of Kings this week.

“This is value addition through litter. We collect used plastics and clean them before processing them into diesel,” he said in an interview at the Nust stand at ZITF.

“At the moment through our laboratory testing we’ve discovered that plastic can, through mixing with other chemicals, be used to generate 60 percent diesel.”

“That’s why I’m here today. I’ve to showcase my invention and it needs financing to the tune of $100,000. I hope someone can buy into my idea and sponsor my project,” he said.

The youthful innovator said his diesel was yet to be tested on vehicles as he has not produced enough quantities for bulk consumption.

“This could also create employment if it succeeds. We can create employment for people who would be collecting the waste on our behalf. 100 kilogrammes of plastic litter is equivalent to 55,2 litres of fuel,” he said.

Nust director of marketing and public relations Felix Moyo said such innovations have seen the university topping the education category at ZITF for the past four years.

He said Nust was encouraging their students to invent gadgets that can change lives.

“Innovation projects improve people’s lives as well as the nation at large. We’ve managed to top the education sector through the sincerity of our projects.

“Our innovations are things that are implementable,” he said.

The innovation is in line with the government’s Science Technology Engineering and Mathematics (STEM) initiative, which seeks to develop Zimbabwe into a science and technology driven economy.

“STEM is really not about academic subjects but the subjects should be practical to transform people’s lives and the economy as well as the country,” said Moyo.

What you can read next